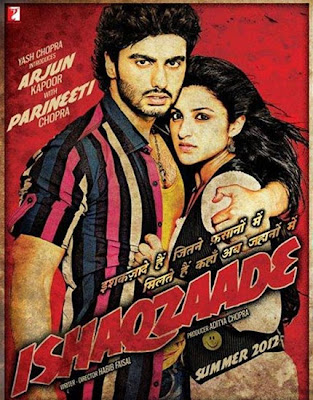 There is new star kid on the block, or rather a producer kid, since we are talking about Arjun Kapoor. And here´s hoping he´s going to take after uncle Anil rather than uncle Sanjay. In his debut, proudly presented by the Yashraj production house, Arjun and Parineeti Chopra, who has so impressed one and all in her small role in very blah Ladies vs. Ricky Bahl last year, set out to burn the world with their own take on Romeo and Juliet, and to make the emnity between their families even more intense, it´s not just them being political rivals that raises the hatred, but also the difference of religion.

Or so it would seem. Why else would he follow her everywhere, asking her to go out with him? Why else would he dare to come to her yard and bear the merciless beating from her brothers? She charmed him, he claims and stares at her with his dark eyes. And she, slowly, accepts. And too falls in love. Instead of running around the trees they are learning to shoot a gun, instead of a saree floating in a gentle breeze Zoya takes shower with her clothes on while the beautiful “Pareshaan” plays in the background. Finally Parma proposes to her and after bit of a convincing Zoya agrees and in secret marries Parma according to both Muslim and Hindu rite. And according to human rite too (aka they have sex if you didn´t get that). No sooner Parma rolls off of her and the most disgusting twist ever takes place. There was no marriage, Parma says. The priest was a paid actor. He did all this to get Zoya into bed. Unmarried Muslim girl looses her virginity to a Hindu guy, who is her family´s enemy. And Parma makes sure the news is known to one and all. Zoya´s father looses election. And Zoya herself swears revenge.

I must say that though the film kept me entertained well enough I couldn´t help but feeling something was just so so wrong. The sexism (because it is soaked with it)? Perhaps. The twist? So bloody disturbing (and disgusting as I have already mentioned)! Also the characters were rather confusing and without development jumped from one avatar to another, without explanations. And while I could possibly accept Parma´s change of heart, Zoya´s falling for him AFTER the interval remains absolutely unacceptable to me even now. There are things you do not forgive, and I can´t see why you should be proving your love for the bastard by running away with him. What Parma does to Zoya is unimaginably cruel, way more terrible than for example being unfaithful. The two of them getting together just didn´t seem like the right thing to happen, but happen it did and one had to accept it. I don´t know if complaining that the characters were stupid is in place though. Because for all the silliness and lack of logic they seemed real enough. A horrid thought of today´s youth being actually like this has been haunting me ever since. Or perhaps a confident debut by Arjun and natural performance by Parineeti make it seem so convincing?

The ending of the film makes sense, yet it is nonsense (and am I making sense here? Huh?). Firstly – why would a girl, who knows her father is ready to kill her, go back home? Secondly – why would their families organize a massive hunt throughout a city and then a school building to kill them? You already had a scandal and you think killing your own kids will improve your image? And finally – you couldn´t find a more painful spot in his body to shoot into, right, Zoya? Who shoots their loved one in a way they suffer for long??? All in all the finale seemed half baked. As if the writers got tired of it all, of the story, of Zoya and Parma and their love.
Posted by Gaja Gamini at 21:22