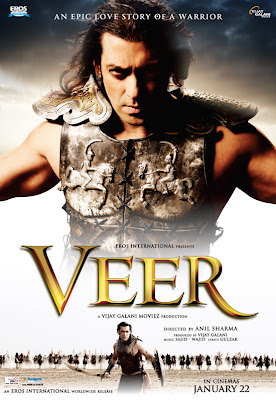 They called it VEER but I shall forever remember it as WEIRD. But to be honest I don´t thing a proper adjective to describe how awful it is has been invented so far so let me just tell you this: Veer is one of those films that need to be burnt and its ashes then scattered in the deepest space so nobody can ever watch them again. Every mention of it should be erased and those who has seen it should be brainwashed until they don´t remember. Back in the 90s the filmmakers may have already seen that Salman Khan´s film ideas make only a huge mess, and yet not twenty years have passed and they decided to create a movie based on his idea again. Hopefully for the last time ever.

The story is basically dealing the Pindaris (who they really were I had to look up on the net) and one huge betrayal by aging but still having „it“ Jackie Shroff. The betrayed one however was none other than Mithun Chakraborthy, and after cutting off Jackie´s arm, he fled with the rest of his people and raised two sons – Veer (Salman) and another one (played by Sohail Khan). He then sends these sons to England to „absorb“ British cunning ways so they can use that against the English rule and also against Jackie, who is ruling like a Raja in one of the Indian provinces.....

The time frame of the film is utterly confusing. We are told that Veer was born in early 1870s , so if he is supposed to be 25 in the film, it is taking place somewhere before the year 1900. I can assure you though, that at that time there was no Czechoslovakia (indeed mentioned), there were no black women in British universities, pineapples were not sold in the streets of London, ladies were not wearing such awful dresses and men would actually take off their hats before dancing at a grand royal ball. Nobody is really concerned about minor inaccuracies in films, but Veer is nothing but a shameless history rape.


While in this really strange out-of-time caricature of the British capital, Veer falls in love with an Indian princess studying abroad. Zarine Khan, who essayed the role, is one of those misfortunes brought upon Bollywood audience by Salman. Her face has a striking likeness to Katrina Kaif and they both share the same stoned face, seemingly unable to move no matter what their character is supposed to feel. She doesn´t suit Salman as a pairing and again her outfits in the movie were anything by accurate (historically and geographically). The bad choice and presentation of the heroine kills of the romantic part of the film.
The patriotic part of the film is unforgivably boring. The script and twist are not at all exciting (though curiously still a bit better than the utter snooze-fest called Mangal Pandey, where it was Aamir Khan trying to convince his countrymen it would be a good idea to kick the British out of India), the action quite ridiculous because of all the unrealistic effects that are supposed to make Salman look like war God defying the very basics of physics, but are not cool as a part of what aspired to be a historic megafilm. Mithun and Jackie easily steal the show whenever they are in the frame, even their roles are not that bad, but they are not given a proper storyline of their own, that would utilize their talents (especially not Jackie).

Veer really is weird. The London part is the worst, with an obligatory scene with a super racist white teacher insulting his students so Salman can have another patriotic speech, and with streets full of young white women who look so happy and positive you start thinking if they are on drugs. And thus I have to warn you – think twice before you let the bleeding Salman with an axe in his hand ride onto your TV screen. Unless you´re in a mood for one of the most unintentionally hilarious films ever.