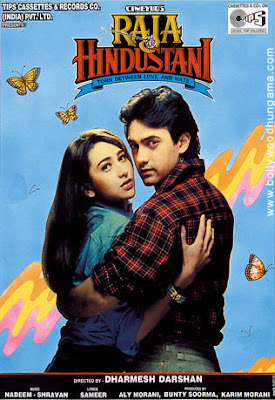 When I think about it, it was not really Devdas, that was my first brush with Bollywood, but Raja Hindustani. A friend of mineshowed me a youtube video – for laughs, commenting on it as the song progressed. A seriously depressed guy singing his heart out while object of his desire sits all quiet with eyes bulging wide to the point of scary, a weird man dressed as a woman, a woman with so much paint on her face and drinking from the bottle being disturbing, and finally big finale with the girl falling into the boy´s arms and her father being apparently displeased. My friend thought the song was the movie´s finale. How wrong was she, unfamiliar with Bollywood ways back then. The song was Pardesi Pardesi and it signified only the beggining of the all the troubles for the on-screen couple.

Rich and beautiful Aarti (Karishma Kapoor who got rid of her mad curls and shaped her wild eyebrows which she sported in the early 90s) makes a sentimental trip to a small city of Palanketh, a place where her parents first met, before leading a loving marriage and having Aarti. Sadly Aarti´s mother died and her father married for a second time – a much westernized (read BAD) and greedy woman, who´s fake affection for her step-daughter is so obvious it hurts. In Palanketh Aarti, accompanied by a sibling duo of brother and sister who, for the sake of laughs, switched personalities and visage, meets a poor taxi driver Raja (Aamir Khan). Raja is not only poor though. He is honest, hard-working and obviously the director´s vision of a true Hindustani, unpolished and uneducated but with high principles of morality at heart. Principles so high I actually took offense because it bordered on completely sexist.

A woman he has no relation to apparently cannot wear a western (read BAD) dress of her liking, because some other uneducated men make remarks about her then. She naturally gets angry, but apparently doesn´t learn her lesson, and instead of dismissing the taxi driver, she not only falls in love with him, but actually leaves her loving father for this man, whom she only knows for a few days, and who is an utter mismatch to who she is. I could never understand why would Aarti sacrifice everything she had – not only status and riches, but her own family and even education and ambitions – for a man who refuses to change in the slightest because of her. I foud Raja extremely selfish and Aarti lost her appeal once she actually took his side, leaving heartbroken father behind.

Once Aarti and Raja get married, their love story actually becomes hardly bearable. Raja turns out to be proud, uncompromising, even to the point of abusive (and later in the film he goes totally bonkers), while Aarti considers an occasional dance to a catchy song a solution for all marital problems. However evil plotting westernized step-mother initiates the „happy“ couple´s split up (by pointing out the obvious – Aarti is a sophisticated and naive girl and her husband a jerk who clings to his pride more than to his love) and while Raja returns to Palanketh to grow a beard Aarti gives birth to his child. By this point the film went pretty much insane with Raja stealing the baby (because obviously he on his own in his chhota hut can give his son a better upbringing than his mother in a bungalow) and fighting a bunch of goons while still holding the baby, throwing it into the air and stuff while beating everybody up. And finale? The insane dude forgives his weeping wife because everybody gathers around and sings.

Raja Hindustani is just horrible. Aamir Khan actually gives a good performance, but Raja is just too awful as a character, Karishma Kapoor, who created sensation with this movie, is objectively speaking very weak in this movie. I like Karishma, but a great part of her films never did her justice, and she has very few performances that could be really praised. I believe that it was really her looks and style, so different from any other heroine till then, what caused the rapture and gave her a real standing among the A-listers.

The plus point would be some of the songs, and in a strange, twisted way, the movie is actually enjoyable – if you deliberately decide to turn off your brain. At the same time it is one of those movies that can only do Bollywood more harm than good when shown to a person unfamiliar with Indian cinema.