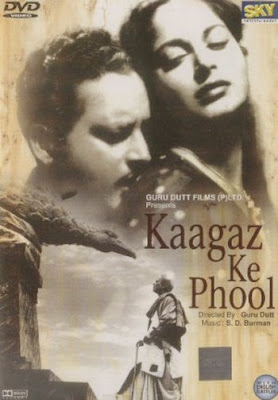 This is what stirs the heart. This is what deserves to be called epic. This is what amazing films should be like. And nobody can convince me now, that Guru Dutt is not the greatest of all Bollywood directors ever. And a wonderful actor too. Kaagaz Ke Phool is a story about a man who looses everything, and gets to a point in life, when he even knowingly refuses what he desires most, because his spirit is all but spent and he feels he has nothing to give in return. Many argue that Kaagaz Ke Phool was to Guru Dutt what Mera Naam Joker was later to Raj Kapoor – an autobiography of sorts, a confession of inner feelings. But while Raj Kapoor opted to become a „joker“ on screen for his magnum opus, Guru Dutt chose his film to be set – in film studios and „behind the scenes“. A film with similar concept – of unveiling the mysterious (at that time) world of film studios and filmmakers, was Guddi, but in comparism Guddi was a light-hearted picture about a girl who needs to sort out reality and fantasy, while Kaagaz Ke Phool is like a mirror of somebody´s soul, of the most intimate feelings and beautiful in all its sadness – all of which are chief characteristics of Guru Dutt movies after all. 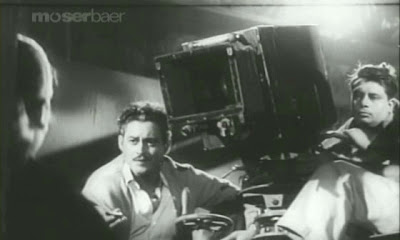 In a one huge flashback we are told the story of Suresh Sinha (Guru Dutt), an extremely successful and critically acclaimed director, who has wonderful career, but highly unsatisfactory personal life. He is married, but his wife has left him after he joined the film industry, faithful to the idea of the time that all people connected with films are despicable, low and „dirty“ creatures. More than his wife however Suresh is missing his teen daughter Pammi, whom his wife is trying to keep away from him. After yet another failed attempt to bring his daughter with him to Mumbai, he (yet again) tries to find solace in his work. But not even that seems to be working, because he cannot find an actress to portray Paro in his „Devdas“. Until one day a girl as fresh as a flower and as different from fashionable glamour divas of silver screen as possible, awkwardly appears right in from of his camera by mistake, clutching a coat he had given her not long ago, when they met during a stormy night, seeking shelter under a tree.... 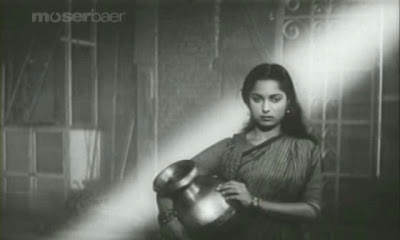 Guru Dutt as a performer was extremely natural. I don´t think that apart from him and Dilip Kumar there has been an actor who would need so little words and expression and yet manage to convey perfectly what the character is going through. He also gives you a feeling there is so much more, still more of that pain and questioning the world, than what is shown through the scenes and dialogues – and songs, that are beautiful and full of beautiful melancholy. Somehow one is not capable of just walking away from the film, even though it is, in a way, quite depressing. Finally one has to wonder how much of his personal life really found place in the script. The thought of him predicting his own premature and lonely death is chilling, even though I am inclined to believe it was all just a very sad coincidence. At the same time, the storyline about Suresh and Shanti, may very well be a heartfelt confession.... 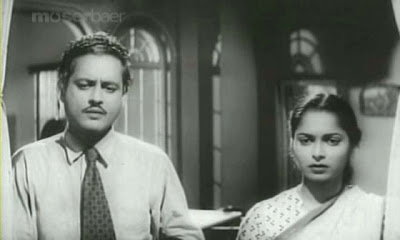 Shanti, a girl already mentioned, that girl who wants nothing but to return a coat, but is made waiting during the shoot, which she delightfully yawns through, is played by Waheeda Rehman. Waheeda Rehman, whom Guru Dutt called his inspiration, and who unquestionably belongs among the most graceful, gorgeous and talented actresses of India ever (I am not discussing this with anyone). One could stare at her forever. Hers is a beauty that touches the inner you, that comes straight to your heart. She can move you to tears just by being on screen, her gentle and yet overpowering presence is extraordinary. Her pairing with Guru Dutt is nothing short of perfect. It is as if they were meant to be. That is all you know watching them. A few softly spoken words, several fleeting touches. And that is all. And yet you know that this is Love happening in front of your eyes. It is no secret after all, that they loved each other in real life as well. Unhappy in his marriage , and feeling misunderstood by everyone (just like the character of Suresh) he found comfort in the young actress, who loved him in return, never exploiting his position in the industry for her own goals, not using him as a stepping stone to secure her own future. 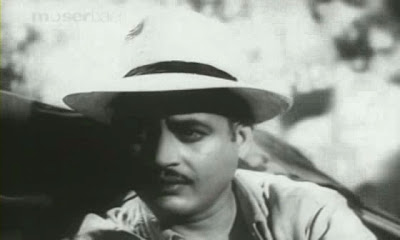 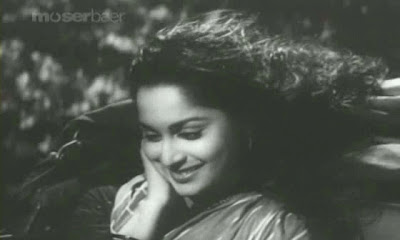 Love is the backbone of the movie, but there is still enough space to other issues to be touched as well. The ungratefulness of the world, the hyenism of the machine that is film industry, the disdain with which some people even today look upon cinema, even emotional turmoil of a child whose parents do not live together. Emotional blackmailing and voluntarily fall of grace too have place in this story. The excellent camera work and lighting of the film are not made justice by new DVD prints, that rarely are of good quality. Time was not kind to the film reels that Guru Dutt once presented to the world.

Kaagaz Ke Phool is no paper flower which looks beautiful but has nothing else to offer but a shallow, short-lived infatuation before the colours fade. It is a most beautiful rose with soft petals of vibrant tones, blooming eternally. 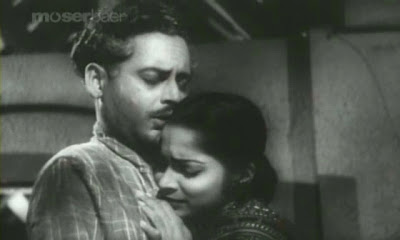