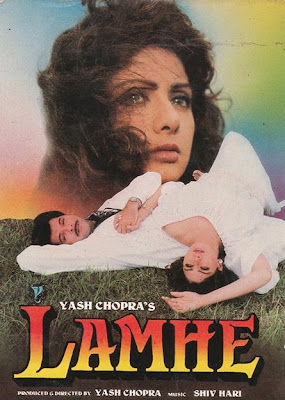 As the sad news of a sudden demise of Yash Chopra seeps in, probably every Bollywood fan stops for a minute and thinks about the legacy this man left behind. I have never tried to hide that I found many of his films overrated, and this feeling remains. At the same time one cannot deny that Yash Chopra was a man who inspired many other filmmakers and influenced Bollywood like only few other people did. And finally I thought to myself that this sad moment actually gives me an opportunity to review a film I consider his absolutely best, and without seconds thought a deserved classic.

A young NRI Viren (Anil Kapoor without his trademark stache) and his old nurse (Waheeda Rehman with her trademark grace) return after many years to India, Rajasthan, where Viren officially takes over the property left to him by his deceased parents. Grown up in London, Viren finds India a strange, yet interesting place. Even more interesting since his neighbour´s daughter Pallavi (Sridevi) appoints herself his guide and friend. And soon enough quiet and romantic Viren falls in love with vivacious and life-loving Pallavi, regardless of the fact she is older to him. One cannot wonder. Sridevi as Pallavi is utterly gorgeous, Yash Chopra was in the end someone who always made his actresses look stunning. However all too soon her father dies and heartbroken Pallavi soon after break Viren´s heart, as she misses his open arms only to fall into another man´s embrace. The shaken Viren comes to know Pallavi has been in love with Siddhart, an air force pilot, and to ensure her happiness, Viren has the two of them married. Nursing a wounded heart he then returns to England, and unsuspecting Pallavi keeps him informed about her life in letters, which he stores with almost religious fervour, as well as few other little mementos, including the anklet she lost that night she danced for him in the desert....

But after just few months of happy togetherness Siddhart and Pallavi both perish in a car accident, leaving behind a tiny baby girl, whom Pallavi manages to entrust to Viren´s old nurse Dai jaa. The older woman names the baby Pooja and brings her up in India, where Viren finances everything, but only comes there once a year, to remember death of his love. Not once he agrees to see Pooja , although he bears no ill will to her, and showers her with gifts. The curious girl (also played by Sridevi, because whenever Sridevi has a baby in a film, it looks exactly like her), however, could not be less satisfied. After all, she has decided a long time ago in her kid heart, that one day she is going to marry this mysterious benefactor of hers. Clueless, just like her mother, about what lies in Viren´s heart.....

Lamhe is indeed a rather unique love story, where there lies both an affection for another (in case of Pallavi) and a big age difference (in case of Pooja) in between Viren and his happiness. Anil Kapoor is perfect in the role. His portrayal of the character is subdued and calm – a rather extraordinary thing to behold when it comes to him. Anil of that time was usually a hero roughly treated by life, wearing jeans and taking bloody revenges, but Viren is completely different. Quiet. Thoughtful. Sensitive. The scene where he sees Pooja for the first time, and thinking probably a miracle has happened and that is Pallavi in front of him, is extremely powerful even without words. I feel that very often people very unjustly leave him out when talking about the film. He deserves as much credit for making it beautiful as his leading lady.

As far as Sridevi is concerned, in my opinion, this is her best performance ever. It is one thing to admire about her, that as reserved and withdrawn she is in personal life, she is able to shake all her inhibitions off once the camera starts rolling. She is a delight to watch as both Pallavi and Pooja (characters that actually have a lot in common – apart from one being mature and one still very much childish). Her somehow constantly surprised and mischievous expression and innocence mirrored in those huge eyes lined carefully with kohl, is perfect. Her dancing in Megha Re Megha and Chhudian Khanak Bole wonderful. She infuses life into her role with so much conviction you cannot but applaud her.

Two other supporting actors, who absolutely need to be mentioned, because even without them Lamhe would not have been what it is, are already mentioned Waheeda Rehman and amother of my favourites Anupam Kher. Waheeda never lost her grace and aura, and even as wise and selfless Dai Jaa she is capable of winning the hearts of audience, and equals Sridevi´s overpowering screen presence with magic of her own. Ah! And that glorious moment when she actually bursts out singing her famous number from Guide! Anupam Kher as whacky, good-natured Prem, a friend of Viren´s, who keeps pushing him and Pooja together in his own sneaky but well-meant ways, is too endearing. His bonding with Sridevi in London is hilarious, his singing of Kabhi Kabhie near the end gets you emotional.

Lamhe has been many a time rejected by some viewers, who found the story incestous. I can understand where these people are coming from. Viren did love Pooja´s mother and he was the girl´s guardian. But at the same time, I never really thought about this while watching the film. It is not like Viren was married to Pallavi and then pulled off Woody Allen. Pooja´s eternal crush on Viren, is probably more questionable to me, and one has a feeling she had to be really cut off from all the society, because her whole existence seemed to center around a man she has only heard of. I read that Sridevi herself objected to the ending of Lamhe and i must say I too would find it more logical if Viren indeed refused Pooja and she went on with her life without him. Then again the film is so beautifully constructed and acted I have no major objections to the happy ending either.

The only flaw I find in Lamhe is – Siddhart aka non-actor Deepak Malhotra, whom the trees give a stiff competition. It really felt like Yash Chopra just stopped the first fair guy he found on the street, dressed him in a uniform and put him in front of the camera. Poor Mr. Malhotra was atrocious from stoned expression to non-existent dialogue delivery, and what a shame – he did not even look good with Sridevi. Then again he is there only to impregnate the heroine and die....

Yash Chopra films are famous for having wonderful soundtracks (mostly, though you could find exceptions) and Lamhe is no different. Melodies and lyrics woven into the story are flawless. My personal favourite apart from the obvious „desert“ number about bangle and a peacock has to be Gudia Rani picturized on my beloved Waheeda and little „Pooja“. There is something universally appealing in lullabies, wouldn´t you agree?

Lamhe is one of those films that stand witness how little the box office results tell when it comes to the quality of the film. A film to cherish. And the best film of an iconic director.