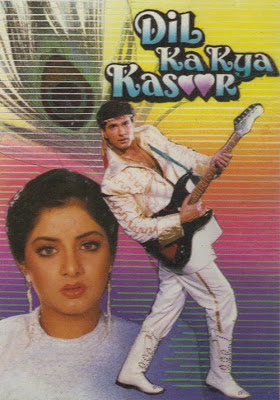 I could very easily have „I love me some 90s“ written on my forehead and it would be true. There is something about that period and movies that came out of it, that fascinates me. There is something in those movies that makes them work for me. Mistakes that are so painfully obvious, do not irritate me – at least as long as the film manages to offer me an experience, if it makes me feel something. Because that is what 90s Bollywood is about for me. Making you feel. If Dil Ka Kya Kasoor was made today, with the same flaws it has, in the same tone, it would probably be extremely cringeworthy. But as an early 90s movie it works. At least to an extent. It is not among the best films though. But I did cry at the end, and had maybe too many feelings to handle for a little while, and so, in spite of everything, I need to present it in a more favourable light (although I´m sure people who understand human body and medicine would have a lot to say on this movie...)

While the first hour pretends to be the been there/seen that teenage romance, it is anything but. Shalu (Divya) is known to be a very unpleasant and arrogant rich girl in her college, and the only one not scared of her is Mr. Scholarship from Dreamland of Just and Honest as well as Well-behaved – and Poor (Prithvi, whom I´ve never heard of before and who looks a bit like young Hrithik Roshan). Shalu promptly falls in love, as he is strumming his guitar and singing on stage – one of the songs she herself has written and published under a pseudonym. She doesn´t have the guts to tell him, and after a talk with her brother, who sensibly advices her to wait until Mr. Perfect manages to find himself a good job and reach something, she agrees, but decides to give her beloved a career boost. Under her pen name she writes songs for him, from her own money she pays for his shows and publicity. Thanks to her he becomes a pop star (who for whatever reason makes headlines on film magazines and is even keeping two Filmfare awards at his night table). He has become someone. Shalu can get married! Or no? 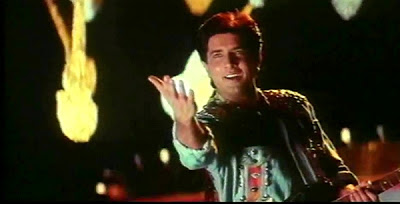 The story takes a rather unexpected twist when the hero gets married to another girl! He is not dating her, he is not even engaged, he is downright proper married and soon with baby on the way. And not even Yash Chopra was brave enough to tear apart a couple expecting a child, so you can guess there and then this may not really have a happy ending. In fact we are for some really depressing and even unusually gruelsome stuff. 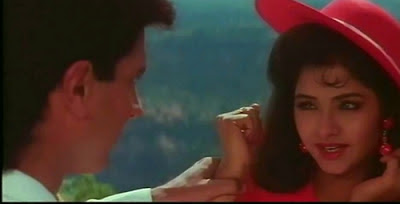 While the story is interesting, the film suffers a lot from bad editing and did not age well (something not many films from that time managed to avoid). Of course, everything modern and cool in it actually WAS modern and cool back then, so in the end I just shrugged my shoulders and asked "Film Ka Kya Kasoor". In spite of that sometimes I just couldn´t help but laugh silently at the horribleness of fashion - and oh my, those stage performances!!! I guess nothing will make the dying girl you never loved more happy than you singing a mournful song with brides and skeletons dancing all around on the set intentionally made to look like a cemetery. The logic of the ending – or rather lack of it - I´d rather not go into. 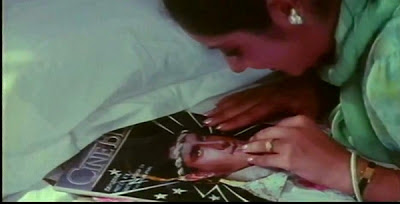 There are only two notable performers in the movie, and Prithvi is not one of them. The hero had looks, but did not overflow with talent, and most importantly felt extremely thanda. He was completely overshadowed by his heroine and Suresh Oberoi. Shalu´s elder brother (because a man in his forties just cannot be an 18-years-old girl´s father) and his suffering was almost too overwhelming. Plus the man has one of the best voices in Bollywood. 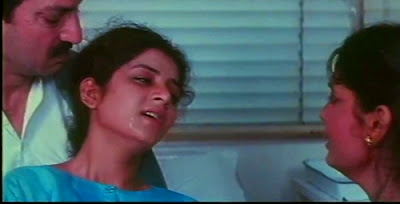 But ultimately Dil Ka Kya Kasoor is worth watching for Divya. She is the heart and soul of the film, and apart from several minor gestures, this is her most mature performance I have seen, probably her best. Two, three films of hers I´ve seen before showed me she had screen-presence and was beautiful (oh she was gorgeous!), and I did see she had potential, Dil Ka Kya Kasoor showed her to me as a good actress, who could easily become a great one. Shalu´s girlish dreaming, her hurting heart, her resignation as well as the utter happiness she gets upon a mere sight of the man she loves, all that was hurting me as a viewer as much as it was hurting the characters on screen. But it was not to be. Divya Bharti is locked within that short timeframe of early 90s for us. She belongs to it just as frilly dresses and big colourful plastic jewelery belong to her. Her death turned her from an aspiring superstar into a tragic Princess, almost a stuff of legends. Within few weeks it will be twenty years since she has passed. And yet immortal, captured by camera lenses, dressed in a ridiculous outfit and with overwhelming innocence in her eyes. 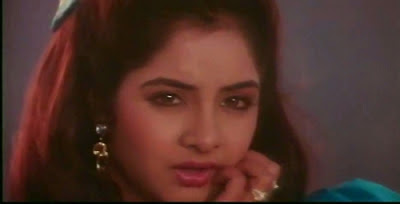