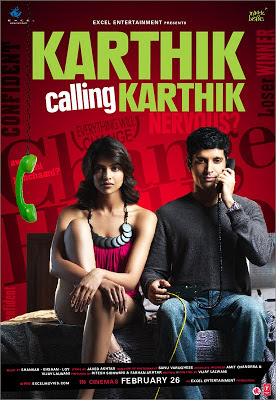 Karthik is a very intelligent and capable man. But being intelligent and capable doesn´t automatically go hand in hand with another thing, that thing which ultimately matters – being successful. Indeed, Karthik is a looser. When it comes to his career, his personal life, even his apartment, he has nothing, gets nothing and is respected by absolutely no one. It´s not that he wouldn´t want his life to change, he is, after all, not a masochist, but all his attempts to stand up for himself (an advice he has so often heard from his psychiatrist) turn out more or less disastrous. When he tries to convince his boss it is actually him responsible for a mistake made, the boss has a fit and Karthik finds himself with no job.

Near to nervous collapse, with nothing in his life and with no optimistic promises of the future, Karthik decides to commit suicide. But just mere seconds before he can swallow a deadly dose of sleeping pills, his phone rings. And when Karthik finally decides to pick it up, he has no idea this phonecall is going to change his life completely. A phonecall that, as it turns out later, cannot be traced. And the calls keep coming. Every morning and 5 AM. The person on the other side is Karthik´s wellwisher. He wants his life to change for the better. And offers the best motivational speeches. And they work! Damn they work.... Overnight Karthik changes from a quiet and „please-forget-I-exist“ looser into an assertive, confident and stylish man who demands respect and gets it. His job is back with bonuses, his boss ashamed. And the girl he always loved finally notices him.

Karthik keeps receiving the calls and cannot believe his happiness. The well-wisher on the other side seems happy too and asks nothing in return. Only one thing – the calls should remain secret no matter what. Karthik promises. But ultimately he decides to share the secret with the girl he loves (after getting elegantly rid of her boyfriend she finally returned his feelings and agreed to marry him), because he does´t want to keep anything from her. He shouldn´t have. She now thinks he is mad. Why? Because the wellwisher who just keeps calling..... is nobody but Karthik himself. And since he broke the promise, there shall certainly be a hell to pay....

Had a phone rang while I was watching, I would have probably freaked out. Because if there is something the movie managed to do in the process, it is to make the phone an evil aparatus that hides way too many secrets for our liking. Especially if you plug it out of the wall and it just won´t stop ringing. You just have to keep guessing. How is it possible that Karthik is calling himself? The Karthik on the phone is obviously the same Karthik we see on screen, yet he sounds too different to be the same Karthik we see on the screen. Is it all in Karthik´s imagination? Is it Kartik from different dimension calling? Is that somebody else altogether just sounding like Karthik? How? Why? What? At some points the film is more of a horror than – a psychological drama. Indeed. The things are a lot less mysterious when revealed and your phone-phobia ends together with the rolling credits.

Deepika Padukone does well in whatever she is given (which is not much), and is as competent as the rest of the supporting cast. The film however really is only about one person and that is Farhan as Karthik. He gives a very good performance. Both the somehow sickly and pitiful Karthik tortured by his demons and a stylish, even ruthless man going after his goal, he delivers. His stages of madness and fear too are excellently captured and enacted.

The disadvantage of the film is it hardly has any repeat value. You are not exactly bored re-watching, but the movie´s effect lies in the fact you don´t know the truth, and watching it with the knowledge of how things actually are takes away the thrilling creeps. And sadly, those are the only feeling worth it in the film.