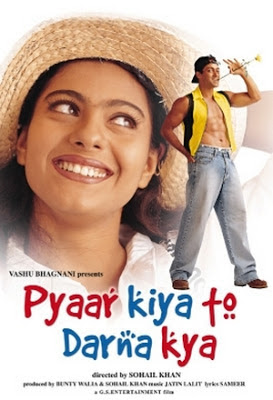 Who wouldn´t immediately think about the iconic song from Mugal-E-Azam upon hearing this film´s title, right? Well, there are no palaces and princes in this one. It is pretty much all Salman Khan in his pre-lazy period rocking the screen. Nice colours, nice music, nice story, I really found Pyar Kiya To Darna Kya, directed by the youngest of three Khan brothers, supported by the fame of the eldest and giving job to the middle one, an endearing venture. In a way it reminded me of DDLJ, mainly because the plot is driven by an idea of young man butting into the girl´s family, trying to win their affection, and to top it the girl yet again is none other than Kajol, but it is really just a similarity and no rip-off I believe.

Muskaan (Kajol) is an orphan, living in a village with her still dashing uncle (Dharam Paaji) and elder, somehow grumpy brother Vishal (Arbaaz), who really doesn´t talk much, neither he likes others to talk much. Other characters we get introduced to are Muskaan´s friend Ujala, who has more than a crush on Vishal (he seems to be completely oblivious and uninterested, even after she throws some uber-sexy dance in his way) and a home cook, who has no role really, but I believe he deserves a mention for the proud presentation of some really weird wardrobe.

Vishal is greatly concerned for Muskaan, she being his everything. And so he keeps rejecting all the marriage proposals and beats the heck out of everybody who even dares to look at her. For all his love and caring, obviously, Muskaan feels rather suffocated in her small uneventful world and so pleads with her brother to be allowed to study in a big city. Reluctantly Vishal agrees and even more reluctantly he drops her to the college – where to his utmost horror young people smoke and – shock shock - DATE!!!! Oh, had he only known his perfectly normal sister may – GASP! - fall in love with a guy her age and choice, he would never have let her go there! But fortunately for Muskaan he cannot see into the future and so she can enjoy a little of life.

Soon enough her friend Suraj (Salman) falls in love with her and wins her affection in return. Unfortunately her big brother, with an empathic ability of a frozen Alsatian dog after a brain transplantation, says a big no no and Muskaan is promptly taken home. But Suraj is not ready to give up on her, and so he finds himself on a quest of sneaking into her home and trying to win everyone over. And he nearly succeeds – but Vishal bumps into a hairy guy looking as stoned as himself, and decides this dude he has known for a few days is the right one for his sister. That is may not be the best decision ever, you can already guess....

Salman and Kajol make a lovely couple. She is delightful as meek, yet loyal Muskaan, but is rather sidelined in the second part of the film, I felt. That is Salman´s show, and he is pure hilarious. Suraj is a perfect combination of a young man very much serious about his love, at the same time he is still a bit of a mischievous child, and Salman captured both the sides of his character beautifully. His comic talent was in the top form. We cannot really shower praises on his brother though. After impressive debut in Daraar, it turned out he is actually not at all a good actor, and the creepy/stoned/unfeeling character is actually how he comes off on screen 99% of the time. Dharam Paaji has a role which is rather useless, but hey, he is Dharam Paaji, mature and handsome, and he gets to kick some butt too.

Pyar Kiya To Darna Kya is a light, fun ride with good cinematography and catchy tunes,and among other little pleasure offering also a hilarious fight among stars of the olden days and younger, then contemporary, stars of the big screen.