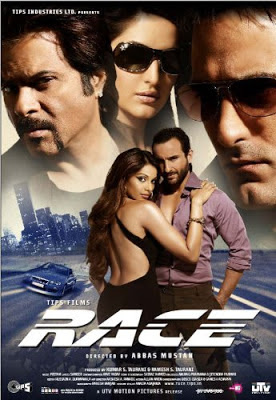 With the upcoming Race two in the pipeline I decided to watch the first film, to see if I my expectations for the sequel should be high or low or even in existence, and also to understand the probable references to the first film should there be any (yes, in spite of knowing Bollywood sequels are rarely sequels at al.... more like an alternative reality story for the same characters, when nothing what we have seen actually happened).

Ranveer (Saif) and Rajeev (Akshaye) are two step-brothers, who at the first sight couldn´t be more in love with each other. Especially Ranveer is doting on his younger bhaiya, even giving up a sexy Sonia (Bipasha Basu) he himself is crushing on, just because Rajeev while drunk once blabs something about giving up alcohol should he get the gal. And so Ranveer with soaring heart makes sure they end up together. But if you think we are going the Sangam way here, you are mistaken. Because in Race nothing really is what it seems, in fact by the end of the film you grow suspicious even of apples and oranges.

To sum it up just quickly: we have a deadly-silent older brother (he is the good one, the one who only kills people who want to kill him, otherwise you´re cool), a more vocal sharaabi younger brother (who kills anyone he needs to be out of the way), a dusky Sonia (who sleeps with the brother she is not married to), a fair long-legged secretary (Katrina Kaif after a disturbing lip job, and dubbed – which doesn´t help as the dubber is even worse than Katrina´s normal voice and diction), and a bit later let enter an amazingly uncool police investigator (Anil Kapoor) who manages to devour just about every fruit that exists on the planet, and his completely dumb 20-something assistant (Sameera Reddy), and they all want their big fat share of paisa. Everyone works with everybody to deceive everyone else.
After a rather boring and unhappening 40 minutes the film gets a good tempo and there is definitely no shortage of twists - some of which I guessed beforehand and some that were completely unexpected (like yeah, I actually was willing to believe Katrina´s character was the only good girl in the whole thing). The dialogues in those first 40 minutes were extremely cringeworthy, consisting mostly of real everyday stuff like "let´s have lunch" and "good morning". The ending should have been tighter and explaining seemed too lengthy.

Congratulations to Abbas-Mustan. What a brilliant move to involve the super-annoying Sameera Reddy in a stupid role that made me want to smack her face so badly. Brilliant, because she makes Katrina look a blessing and I am not even sarcastic! I don´t know why Anil signs such embarrassing roles. To see him with girls so much younger than him is just weird. And it´s not like he is evolving as an actor with roles like these. Saif is good, so is Bipasha (although I just cannot bring myself to believe her whenever she acts the good one - she just looks so cunning all the time!), but the real show-stealer is the ever-underrated youngest Khanna. He was brilliant. I guess bad movie choices were his doom, because he is easily among the most convincing and versatile actors I´ve seen Bollywood in the past 20 years.

Songs try too hard to be sexy, but came off as boring. The actresses are way too obviously put „out there“, in case of Zara Zara song Katrina is actually looking more completely desperate for attention rather than being mysterious or seductive, there is nothing intricate or really feminine about the presentation of „sexy“. Made by guys, for guys, I guess. Also the comedy track was completely off. It served no purpose and wasn´t really funny either. Race is a fine watch, that could have been better. Tighter. Quicker. More stylish. Challo, maybe the second one will learn from the mistakes?