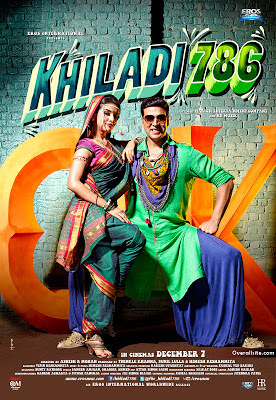 I have learned that a good colourful „silly“ masalla is one of the best things that can happen if you feel blue or need to relax. With an intention to be entertained and setting into my graciously forgiving mood I started watching the latest Akshay Kumar release, that same actor whom I didn´t mind in Rowdy Rathore and thought him pure adorable in OMG Oh My God earlier in 2012. I understand „Khiladi“ is a trademark for him, but from what I have understood, the original „Khiladi“ series were thrillers (?), which this one is anything but, which, after all, was clear from the posters and promos. I had next to no expectations of the film and thought that I could pretty much predict the whole thing. I was wrong.

Akshay Kumar (because his filmy name is too long and impossible to spell correctly for me) is from a Punjab family, into which nobody wants to marry their daughters – because they are goondas, you see (in what way is never really shown), and so they have to marry women from other nations (because obviously those don´t care about your background). But Akshay would really like an Indian girl, unfortunatelly his proposals are being rejected one by one.

Enter Mansukh, a son of a match-maker, recently thrown out from home for ruining his father´s reputation, and hired (more by mistake than anyhting else) to find a groom for Indu, sister of Mumbai Don TT (Mithun Chakraborty). Indu is a spoiled brat who already has a boyfriend, but he is in jail and every single time he is to be released something or the other happens which prolongs his stay behind bars. Indu is patient, but her time is running out, because Mansukh immeditelly has a groom for her in mind – Akshay, who just like ghosts and true pyaar cannot be seen when he moves quickly (not sure that is the best news you can give a bride … but...ehmm... well.....). However Mansukh doesn´t know Akshay is not a policeman, and neither are his relatives, as they claim to be. And to top it he has to lie to them about the girl´s family, and also makes Mithun and his household members of a Mumbai police squad.

After the first 40 or so minutes I was ready to love the movie. It felt funny. Silly, sure, but genuinely funny. Then something happened, fun disappeared, and it just slowly became boring. Akshay is being Akshay, that one who absolutely needs to stop doing films like this for several more years to come. Seriously. Rowdy Rathore, Joker and Khiladi may have had different plotlines and presented him as three different people, but he presented all that in the exact same way, so much you can hardly find any difference between them. His best performance of 2012 thus remains supporting role in OMG Oh My God, any by far it was also the best out of five films he gave us last year.

I always welcome any glimpse of „old“ stars like Mithun Chakraborthy and Raj Babbar, who are largely in the shadows these days, but rarely they get a role that would do them justice in any way. I think the last time I saw Mithun doing something that mattered was in Guru. Asin is as much a leading lady as Bharti Singh (who has short and completely useless subplot to handle). I keep hearing about how amazing she she in her Southern films, and can´t just stop wondering why she is satisfied with playing „bushes in the back“, because that is pretty much everything she has done in Bollywood so far. She doesn´t even have much of a screen presence (like for example another girl, who needs to do more substantial roles – Sonakshi Sinha), and you just couldn´t care about her less.

That characters are sketchy, music bad, jokes over the top and double standarts for men and women regarding age as obvious as ever (27 years old Asin is romancing 45 years old Akshay while being 62 years old Mithun´s sister).... all that I could live with quite well, if only it was a laugh-riot. It wasn´t. Khiladi 876 is actually so forgettable I cannot even recommend it.
Posted by Gaja Gamini at 23:39