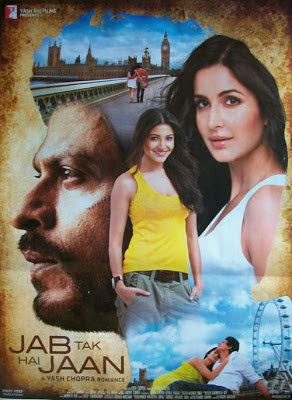 In spite of the fact there were other movies that earned more, I don´t think it´s wrong to say Jab Tak Hai Jaan was the biggest release of the last year, at least as far as expectations are concerned. Well, not mine really, because I never considered Yash Chopra a great director, I did not like the promos and it is no secret I don´t exactly love Katrina Kaif. That, I guess, allowed me to be more benevolent to the film than I would have been had I expected something amazing. Because the film is far from being so. In fact, it is quite far from being good even. Jab Tak Hai Jaan is simple entertainer that does manage to be bearable for most part, but you have to deliberately forgive it much, maybe even too much. The faint-worthy reviews that flooded the media right before the premier were talking about the most epic of the epic films ever, which to be honest I believe were strongly influenced by the sad demise of the director shortly before and nobody dared to give a bad review. It was only after a while that reviews more accurate and less impressed began to appear. Indeed, there are two ways of seeing Jab Tak Hai Jaan. First – while watching the only thing you see is that this is the last film of am extremely popular director, popular not only as a filmmaker, but as an off-screen persona also. Second – you watch it as a film, detached from the facts of reality, and without sentiments. And that was how I watched it. And that is why I can say Jab Tak Hai Jaan is among those Yash Chopra films that are simply not good.

To be fair it is not the direction that is wrong, not at all. The main culprit is the script full of plot holes and characters that are not appealing. Nonsense piled upon nonsense, until I was just left wondering how much further it can go. The first ten minutes are already full of loopholes. Why didn´t Samar jump for Akira sooner? Why after getting her out of water he obviously took time to dress her into his own coat BEFORE starting resuscitating her? Who is as stupid as to leave their army jacket with everything in the pockets inside (including „Dear Diary“) with a completely unknown person? Well, that is Major Samar Anand for you. A man of extreme sexiness, being all quiet and communicating with intense stares. As Akira finds out from the diary, he used to be 25 (or 28, some contradictory information were given) once upon a time, all hyper and full of zest, slogging happily in London and doing various jobs that didn´t really earn him much. He meets a rich girl Meera, who is unsure of what she wants in life, NEVER feels cold and is also a bit of a racist (back in the day she was a blonde white child begging God not to get her married to any Indian because they are brown), and falls in love with her.
It takes a while before she decides to return his feelings, because she is engaged to a white guy, but after a heart-to-heart talk with a mother who has left her as a child to be with her lover and did not contact her for years, Meera decides Samar is worth it. They are as happy as one can imagine. They have cute time and sexy time and let´s-run-through-the-whole-London-to-see-him-off-to-work time, until Samar decides not to heed the basic rules of driving which results into him being run over by a car and Meera doing what every sensible girlfriend would: she immediately promises to God that if he lets Samar live, she will never see him again. Because that is how God works for Meera, you see? He lets her pass exams and she gives up chocolate (instead for example promising to use her education to better the lives of others).

And so when Samar comes to his senses, she comes to announce she loves him and she is ditching him. Instead of realizing Meera is dumb, Samar is angry at „sir Jesus“ and to prove Meera wrong he decides to join Indian army and play with his life (although if he really wanted to prove his point he could have just commit suicide) as a leader of a bomb-disposal unit in Kashmir. That is where annoying Discovery channel reporter Akira steps in with her completely inappropriate wardrobe and puke-worthy presentation of today´s generation of girls, and falls in love with Samar within days after learning his sob-story.

Akira wants Samar to go to London for a day, so her bosses can verify her film on him, and after some thinking Samar indeed comes. And is hit by a car, which I can only see as a not too subtle a message of the film that you should look to the right and to the left before you cross the road. When he wakes up in a hospital, it turns out he has lost his memory. Well, not entirely. He only doesn´t remember anything that happened after his first accident – including Meera ditching him the same way she gave up chocolates. The genius doctor decides that the best way to bring on Samar´s memory is to create a false reality for him, where everybody will lie to him and make up fake memories, a reality where Meera is his wife and he owns a big restaurant in London. Because yeah, that is how he is surely going to remember he spent ten years playing with death on the other side of the world.

As for Meera, she did not marry anyone, did not age a day, and spent those ten years moping around. She agrees to be a part of the plan, but gives up few days later, because being close to Samar gives her pain – because she still hasn´t understand God is not a vengeful monster who works on her command and that he actually has understanding for things like love. Fortunately Samar gets his memory back – in one of the least exciting bomb-disposal scenes ever, and returns to Kashmir. If you think he finally came to his senses and realized Meera is just a dumb bench, you are wrong, and so we get to see him being reunited with her, as she randomly changes her mind in the end.

The saddest part is that the film at no point really gives you a vibe of being an epic love story. That is largely given by Shahrukh sharing no chemistry whatsoever with either of the actresses, and not even the infamous three kisses he shares with Katrina, and around which a lot has been written, save anything. They are not as awkward as some people were describing them, but at the same time they were just so randomly thrown in and thanda and not needed one asks what lead Yash Chopra and SRK both to break an old rule they both had. At the same time I don´t understand the big hoopla about it.

What actually irritated me was when, after watching the movie, I realized that Shahrukh had pretty much nothing to do. Everything shown he has done before – and better. There was not a single scene he could actually sink his teeth into, and indeed he served more like an impuls the two women reacted to more than and actual hero. Both Katrina and Anushka had, ironically, better roles (in terms of making things happen, not in terms of being good characters). Samar Anand thus becomes one of the least inspiring and memorable SRK´s characters. I also found it ridiculous that they tried to pass him off as being 25. Camera filters did erase his wrinkles (to the point he seemed a cartoon at times), but it couldn´t erase the maturity of his face, eyes, or voice. He is good, of course. But at the same time extremely lukewarm compared to his other roles. And I realized, that I don´t want Shahrukh to do films like these. I don´t want him to be a loverboy. Not again, not anymore. Let him do a mature romance. That is something I would love to see.

Katrina Kaif is no longer irritating on screen for me. And she can dance well. However her lack of acting skills is once again for everyone to see. Meera is not a well-written character (she has to be the worst YRF heroine ever), but there was potential in the role for a good performer to turn her into something. Katrina however, makes her only worse. What is it that Samar saw in Meera apart from her being hot? In the best moments she still seems detached from what is going on around her. Her expressions hardly ever changes, apart from her mouth being opened of shut, her dialogue delivery remains cringe-worthy. Meera´s dealing with God were nothing short of disgusting for me. I probably wouldn´t dare to say anything if Meera was a Hindu or Muslim, or belonged to any religion I am not a part of and hence cannot really comment on, but she was a Christian, and there I can firmly say, that she had the most deformed vision of God possible. A God who trades life successes for minor discomforts, a God to whom it is more important that you fulfill a promise that came out of your own mind and not on any demand of His than that His children prosper in love together, that is not a Christian God, that is some strange creature with ways more similar to devil than „sir Jesus“.

Anushka Sharma, on the other hand, does have it in her to give us a good performance – Akira however is yet another in her growing collection of bubbly characters she has done in films like Patiala House, Ladies vs. Ricky Bahl and Band Baaja Baraat. Hyper, loud, cheerful, ambitious. And terribly annoying. In her case I am not sure if the blame is hers or if it should be put completely on Aditya Chopra and his poor writing skills. Anupam Kher, Rishi Kapoor and Neetu Singh have fleeting cameos, but are a welcomed relief. In fact the moment when Neetu recognizes „her daughter“ who had come to visit her, brought a tear in my eye.

One thing I have to admit: The film doesn´t feel old-fashioned, in spite of some old-fashioned elements, Yash Chopra indeed was young in spirit. That however doesn´t make Jab Tak Hai Jaan any better. It is an average fair, below par next to everything Yash Chopra ever did (and I´ve seen), that even in the music department. Out of the whole soundtrack only Chhala and Jiya Re are worthy of more attention. The title song doesn´t stick in mind, and Saans and Heer are nice, but too whiny to listen to after a while. Ishq Shava I almost forgot about already. The opening titles melody I loved. In fact Shahrukh Khan riding his bike to the music was the best part of the whole movie for me.

Jab Tak Hai Jaan is a movie that doesn´t do justice to absolutely anyone involved, least of all an iconic director, whose films I may not love, but I still respect for his contribution to the cinema.