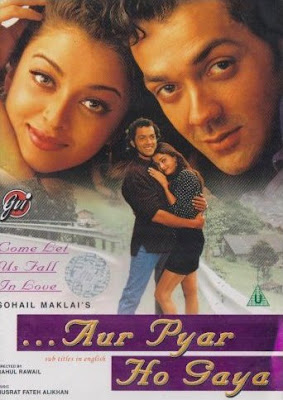 Aur bakwaas ho gaya. Aishwarya´a entry into Hindi films is not only not memorable but it is actually very much desirable to pretend it never happened in the first place. Sadly she was no acting miracle and so she is also responsible for the movie balancing on the edge of unwatchability, but the blame needs to be put also on extremely shallow script, bad direction, forgettable music, and Bobby Deol, whom I just cannot take seriously. My view on him and his questionable hairstyle may be changed if I stumble upon a film that will present him to me in a more favourable light (like it happened to Rishi Kapoor), but so far Bobby boy was not lucky in that aspect.

We first meet beautiful young Aarshi at her friend´s sangeet (the best five minutes of whole movie for Aishwarya´s gorgeousness and dancing), and a bit later buying a super expensive horse. Just so we know she is filthy rich. Her father then fixes her marriage with a family friend´s son Rohit, and Aarshi has no objections, even though she has not even seen a photo of her future husband. But then one of her already married friends commits suicide (no less!), because obviously her husband turned out to be quite a kamina after the wedding, and THAT is when Aarshi realizes it might not be the best idea to just get married without knowing the person. And so she has a super original idea. She is going to stalk the man (she doesn´t even know what he looks like), who conveniently for a 90s Bollywood stays at Switzerland at the time. The whole point of taking Aarshi there is to make Aish wear some cool and latest 90s fashion western outfits and super short skirts.

In Switzerland she bumps into a hairy guy who annoys her extremely (yeah, this is Bobby Deol making his entry while dancing awkwardly with her photo in his breast pocket), only to assume few more annoyances later he is probably the guy she flew down to check out. To her great pleasure he is practically a saint and Aarshi promptly falls in love.

But the guy is not Rohit... yadda yadda yadda.... doesn´t matter cause he´s too filthy rich...yadda yadda yadda.... he makes fun of Aarshi´s dad unknowingly... because of that daddy dearest forbids the marriage.... yadda yadda yadda.... more extremely weird problems.... yadda yadda yadda..... happy ending. I lost my interest pretty soon. The film obviously aspired to be a romance aka DDLJ (just BIGGER so Bobby in the end doesn´t help Aarshi into a train but actually outruns an airplane and STOPS it by crashing an animated car in front of it for which I suppose he was later arrested and charged but film ends before that happens). Most of it was so cringe worthy I wouldn´t label it even „unintentionally funny“, because I felt sincerely embarrassed watching it and its protagonists being stupid.

Aishwarya, bless her heart, has always been a beautiful girl, and thank God for that, because her looks was really the only saving grace of the whole movie. Other then that she was atrocious, possibly one of the worst female performances I have seen in my whole life. Her face was unmoving, her dialogue delivery made my ears bleed and her overacting made me tear my heart out of frustration. She was really cute in the scenes with Shammi Kapoor though. Bobby Deol, as I have already said, was just awkward to watch (Dharmendra´s children were just not blessed with his looks or talent), Anupam Kher pull off yet another of his OTT performances when you have difficulty deciding if he is brilliant or awful (in this particular case I tend to believe the latter), Shammi has a very small role, but it was lovely to see him for a few moments at least.

Awful launch for Aish and a „let´s suffer“ movie if you are in a masochistic mood (that I have to admit I sometimes am and that is why I end up watching even films nobody else would).