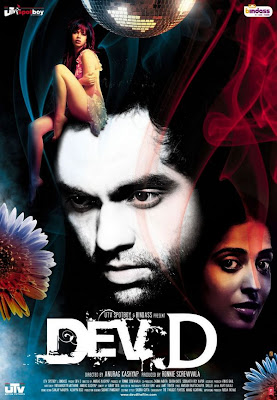 Dev D has to be the most unconventional take on the famous story of Devdas. It mocks it in a way, disrobing it of everything nicey. The enchanting spirit of the first love, the mystery of kothas, the purity of Paro and her regal manner, the pain of being parted, the slow grow of another love.... If we see the story of Devdas, and its previous adaptations, as a full human body, then Dev D puts a knife through it, dissects it and after a painful process leaves nothing but a skeleton, upon which it places things of its own liking. And so instead of 19th century Kolkata we get the new age Delhi, instead of an enchanting tawaif we get a full fledged vulgar prostitute and instead of epic love we get lots of, well, lust.

Far away in London, Dev is spending his time studying, but thanks to modern technologies, his Paro back in India definitely cannot complain about lack of communication. Online chatting and telephone calls are obviously a daily routine. And then the happy day comes when Paro sends Dev her nude picture and upon seeing her boobs he excitedly and immediately calls back to tell her he is coming back. What a timing. Upon his arrival he and his lady love both only care how and when and where to get laid as soon as possible, but something always comes in between. However, because Paro is that kind of girl who simply arouses male fantasies (and more) just by being herself, one of those who are „in love“ with her, lies to Dev she sleeps with anyone. Dev, as every average male, immediately accepts that as a fact, and without even bothering to ask Paro, he tells her she is a slut and he would never marry her (indeed, there is no parental disapproval in this one, which makes Dev even bigger ass than he usually is). The epic love story continues with her immediately marrying the first guy who comes her way (fortunately for her he has loads of cash) and Dev throwing up at the wedding.

The storyline then follows a familiar pattern. Dev is unhappy. Paro moves on. Dev is even more unhappy. Dev drinks – and because that is not enough in our new age, he is into drugs to REALLY show you how pitiful he is. He gets introduced to „Chandramukhi“ and spends some time with her, finds out she is also just a human etc etc etc..... True enough, in the end this particular doomed lover (read: sex obsessed junkie) DOES move on as the only Devdas in history, which is one of the few better moments of the film. First half of it was actually quite good, introducing the characters and giving them some unusual layers, however the second quickly becomes boring and it doesn´t pick up anywhere on the way to the finish.

Abhay Deol is a good actor, but after being spoiled by subdued and tragic Devdas by Dilip Kumar and just as tragic even though much more loud and passionate Devdas by Shahrukh Khan, I must say that Abhay makes a good idiotic Dev, but he is not „Devdas“. There is nothing to his love that would not be bound to physical, which is quite strange considering there is supposed to be a bond with Paro from childhood. His performance is not all that impressive as a whole anyway. At no point you would feel he is in love - with Paro or Chanda. Mahie Gill as Paro has very little screen time and does very well, but as it happens regularly – it is „Chandramukhi“ who steals the show. Kalki as Leni/Chanda is excellent, and giving her character a background was a brilliant idea – and so well made it actually makes it difficult to watch. To make the story centred completely around her and her story would have actually been much more inovative and original then just stripping the story of everything that makes it appealing and turn it into a Bhandarkar´s film set.