Even in black and white the visual beauty of this movie is astounding. The costumes, the sets - and of course the heroine - all is just overwhelmingly gorgeous. Wonderful camera work that takes into account the magic of light and shadow managed to capture even the smallest details. As a result Chaudhvin Ka Chand reminds one of a long lost fairytale or a dream long ago forgotten, but all the more familiar once before our eyes again. And once the films switches to colour for a little while, during the iconic title song, you could just faint at all the beauty. Interestingly enough having only that one song in colour while the rest of the film is in black and white, only ads to the magic overall. Sadly, the story itself let me down. When Pyare (Rehman) sees a beautiful girl at a market, he is completely besotted and immediately falls in love. 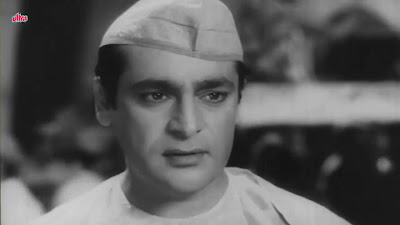 However soon he looses her in the crowd. Fortunately for him the very same girl attend his sister´s birthday celebrations, and so Pyare entrusts a servant with a task to find out her name and whereabouts. The servant indeed does have a name for him after a while, but unknown to Pyare, she got mistaken and identified another girl for him. Without checking anything or asking anyone (least of all his own sister), Pyare has a marriage fixed, and the only thing that seems to be between him and his love is his mother insisting he marries a daughter of a priest and family confidant. Pyare thus seeks help with his best friend Aslam (Guru Dutt), and wants him to marry the priest´s daughter in his stead, to save his own happiness. And Aslam, a good friend he is, readily agrees. 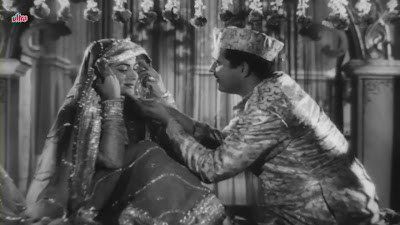 Without even looking at his friend´s new bride, that he himself drove into his arms, Pyare is in for a nasty shock, as he realizes the girl he is supposed to marry is not the one he´s been looking for. And it shall remain unknown to him for a long time after that still, that it was actually Jameela, a daughter of the priest, who now has found her home with Aslam, who too has fallen madly in love with her. Till now I was absolutely charmed. However as much as I loved the first half, that much I was shaking my head over the second. Yet again we deal with sacrificing love on the altar of friendship, a concept, as I understand, this movie actually made popular, however in this particular case it is all worse because one of the friends already married the girl in - and yet he still is trying to find way to to push his wife into somebody else´s arms. I was genuinely frustrated by the character of Aslam for doing everything stupid just to ensure his friend be happy, while in the process he is destroying himself AND the woman he loves, without giving her any explanation. Why is he so unable to tell his friend the truth, I might understand, but why he is equally as unable to share the secret with his wife? Especially after he must have realized she is not leaving him in spite of anything? The scene in which he tells her a story about a precious stone that a friend unknowingly gave him, in spite of wanting it himself, made me want to scream that this was no inanimate object he was speaking about, it was his own wife, and to compare her to a thing, no matter how precious, was just completely off-putting. 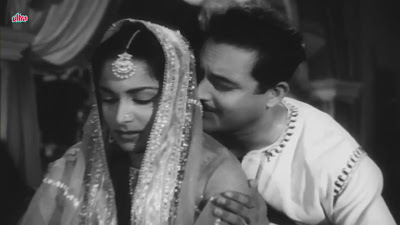 In the end I was seriously mad as selfish Pyare, for whom the whole world obviously needed to make a sacrifice, and I was rather miffled with Aslam, who goes nearly mental by the end of the movie. At the same time I did feel sorry for his plight, which I guess has a lot to do with Guru Dutt´s ability to portray a complete disintegration of a personality with such conviction. Johnny Walker as the third friend has way too much screen time for my liking, fortunately his character was not so completely over the top as usual, and so I could tolerate him. 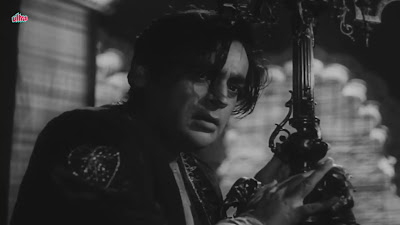 Waheeda Rehman is a stuff of legends. It was definitely not enough of her in this film, that ultimately is more about the two friends than love between husband and wife (which is a pity because her scenes of marital bliss with Guru Dutt were the highlight of the film for me), however she was an appropriate choice for a film like this, because apart looking as breathtaking as if she has just stepped out of the pages of a Tolkien´s book, she is one of the few actresses who just needs to be in the frame and she completely draws attention to herself and leaves audience in awe and wanting more, in other words exactly the kind of a woman that could make others fall in love at the first sight so passionately. 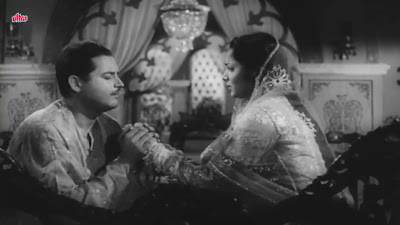 While the plot and the story were disappointing for me, the technical aspects of the film win some points, as already mentioned. Also - some of the scenes are just wonderful examples of love and romance. Aslam scaring his shy bride describing how hideous he is until she panics and throws the veil away from her face to look at him, when he finds her asleep by the door, waiting for him and carries her to her bed, even a little scene near the very end, when he stops her going into the room Pyare just died and silently draws a veil over her face, the very face which was the reason of that death – all that and more made me fall in love with the love Aslam and his wife shared. All I wanted was for Aslam to come to his senses, and after some impuls stand up for his love, rather then mope and making her suffer for the sake of a selfish friend. Yes, there was a scene like that, however unfortunately it did not lead to a finish I would have preferred. So did I like the film or not? Looking back I did, however I realized I pretty much erased all the scenes that made me fume with frustration from my memory. All that I remember and that I dearly love is the beauty - of the costumes, the sets, the music, Waheeda and her loving moments with Guru Dutt. 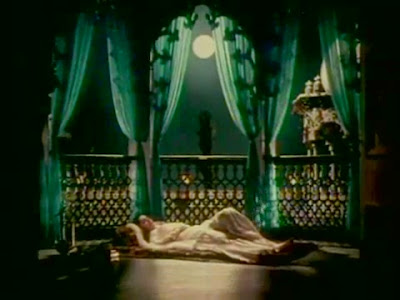 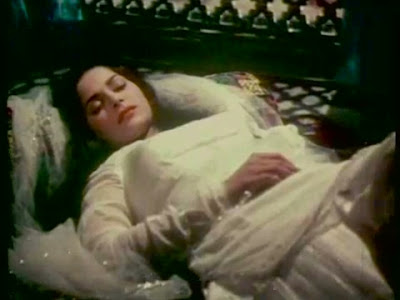 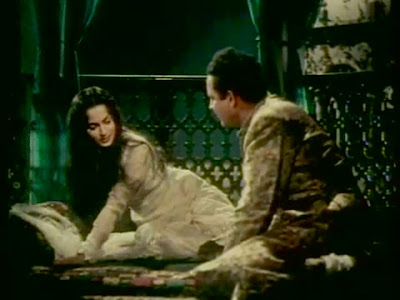