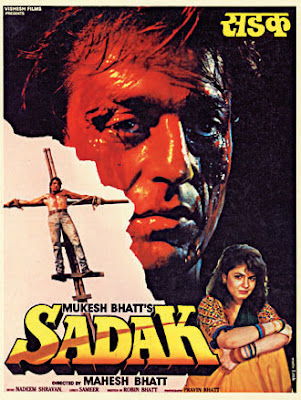 I think I am not wrong to say that Bollywood does not make too many thrillers. Romance and masalla have always had a strong grip on the Hindi film industry, and thriller has always seemed more rooted in the West. No wonder then that to find a really good Hindi thriller is not an everyday matter. If you are looking for one though, Sadak should be next on your wish-list.

Mullet-walla Sanjay Dutt play Ravi (for whatever reason I just hate that name), a poor but honest taxi driver, burdened by a terrible tragedy that had occurred earlier in his life. His beloved sister went missing, and when she reappeared, it turned out she was forced to become a prostitute. Ravi refuses to follow his family´s example of turning their back upon her, but to his utter horror Rupa is murdered right in front of his arms – she falls to her death from a window, pushed by an unknown killer. This experience causes Ravi to nearly loose his mind, and whenever he closes his eyes the whole drama is happening in front of him again. Because of that he avoids sleep, because of that he often thinks of committing suicide.

Naturally his friends are worried, and one of them (Deepak Tijori, the ultimate 90s sidekick) at least makes him visit a brothel for some distraction. They happen to witness a girl trying to escape from there, and Ravi recognizes in her a girl whom he had met before. From that moment on his focus turns from the dead sister to the living girl, and he sets out with decision to set her free no matter what. But his intentions are difficult to materialize, as his opponent is none other than a brothel owner Maharani. Do not let yourself to be fooled. Maharani is not merely a greedy woman, but an extremely intelligent and cunning eunuch, with great power over the dark side of the society.

I really liked the plot. It was dramatic, but not over-stuffed with happenings, which would only harm the thing. The filmmakers managed to concentrate on one storyline (which is rather rare in 90s Bollywood) and it certainly was for the better. The performances were solid – Pooja Bhatt projected helplessness very well and Sanjay, though a tough guy, managed to show Ravi as caring and innocent man rather then an avenging machine. He is more like pushed into action by consequences, rather then searching for it, he does not seek a blood thirsty revenge, but simply defends himself and his loved ones, coming to terms with the past in the process. Plus Sanjay and Pooja made a really lovely jodi. The greatest impact (of disgust and repulsion, as well as terror) was however left by "Maharani". Bit of a caricature, but so well acted, that the character seemed terrifyingly real, and definitely waking fear in the viewer.

I was completely puzzled by the character of Pooja´s uncle though. So here is a man, who leads his niece into a brothel (the reason for which he did it is irrelevant), he is not at all surprised to see her escape later, BUT is majorly upset about her being in love with the man who led her out. T would have been better if the character in the second half was somebody else, some other relative of the girl, than the very same man who caused her suffering in the first place.

Of course the extremely dramatic scene where the nearly finished hero is made to suffer is not missing, what more – we get some shots that show the innocent Ravi crossed in a very Christ-like way, to really understand the physical and mental pain he is going through. And a bit later quite drastic and bloody climax, during which everybody who has survived in the film this far has to make an appearance, is in there too, all that being obligatory back in the day. The girl is saved, the villain is punished and a pimp is reformed. That is what I call a satisfactory ending, don´t you?