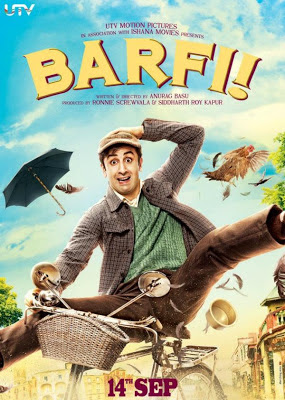 It was with great fanfare that Barfi was announced as India´s this years entry to Oscars, and it was with almost apologetic and „you know“ smiles it was reported the film did not make it into another round of selection. Upon its release in India Barfi stunned almost every critic and more notably also viewers, and while I definitely am among those genuinely charmed, I am not surprised Barfi was rejected by the Academy (if they even bothered to watch it). It was just too obvious a film like this cannot succeed in this particular competition, and I have to wonder why Kahaani or Paan Singh Tomar were not send to the US instead. They were more „Indian“, more authentic, and most importantly original. Barfi is not a remake of any one film, it tells a story previously unseen, however it practically copied scenes from other movies and then moulded them together for the sake of story telling. A job brilliantly done, and in a way I did not find offending in the least, but still, not something you want the (self-proclaimed) most important film award platform to see as the best what you can do - which in this case would mean "copy others".

Copied scenes matter apart (and I myself couldn´t have been bothered less about them, as I have not a single one of those films that were used for inspiration), Barfi is the ultimate feel good film of 2012, and that too with some of the best performances we´ve seen. Ranbir Kapoor has, in a short span of five years, that he is that one thing to watch out for in the future. Extremely versatile and convincing in any role, his own persona always engulfed by the character he plays. It is same with Barfi (Murphy), a deaf young man with an eye for girls and great joy of whatever life brings his way. Sometimes he illegally sells alcohol and is involved in minor crime, which irritates the local police to no end, because Barfi may be short of hearing ability, but is as cunning as a fox and so they can never catch him.

When Shruti and her family come to Darjeeling (a small town where Barfi lives), it doesn´t take long before she bumps into him, and he immediately (and almost literally) offers her his heart, not caring she is already engaged. Even Shruti finds herself in love after a while, but pressured by her parents, she is ultimately not that brave as to let go of all certainties in her life for Barfi. After the disappointment with Shruti Barfi´s father suffers a heart attack, and penniless son knows that desperate times call for desperate needs. And so he sets out to kidnap an autistic girl Jhilmil from a rich family and demands ransom. Too bad somebody kidnaps her right before him....

Barfi is told in multiple flashbacks, flawlessly put together. There is an attempt to tell the story in a rather documentary way, and that too works beautifully combined with more common narrative. Music is very different from what we are used to in Bollywood films, it actually has a very French feel to it (didn´t someone say it was inspired by Amelie soundtrack? Needless to say I´ve not seen Amelie.). The film overall not only feels wonderful, but looks wonderful as well. The hill station of Darjeeling, the crowded but somewhat cozy streets of Kolkata, camera work does all places justice, and captures some truly beautiful details.

Above all Barfi is brilliantly acted. Ranbir, as already mentioned, is a complete natural, and both his leading ladies hold their own against him as well. Ileana, the best newcomer to Bollywood this year for sure, makes Shruti very elegant, gentle girl, very relatable for many. She would like to chase her dreams, and is not exactly forbidden to do so, but society norms are always there to remind her that she should just sit down and be happy with what she already has.

Priyanka Chopra, very much like Ranbir, is probably the most versatile and daring actress in Bollywood right now. With Jhilmil she more than made up for the disappointment which was Teri Meri Kahaani. There was no shortage of great female performances this year, but I believe Priyanka takes the cake. Vidya Balan was nothing but excellent and Sridevi too was pure delight, there was also Kareena who impressed me, and of course Deepika was the best surprise of 2012. However none of them had a role as challenging as Priyanka. She became somebody she has absolutely nothing of in real life.

To portray a person with disability of any kind is always risky. There are too many examples and possibilities of where to go wrong and make such a character nothing more than either a caricature or a pitiful thing that needs to be cried over, but Jhilmil, in spite of being several autistic, is neither. She is innocent, but not pitiful, she is „different“, yet definitely not someone who cannot make a place for themselves in the society. She is capable of utter devotion, that does not come from her being dependent on a person. The girl makes her own decisions. Just like Barfi, who is deaf, autistic Jhilmil does not feel discriminated by being born a bit different. It is a bit uncertain for me to pinpoint which of the ladies was actually the main female lead, because Ileana dominates completely in the first hour, but from then on Jhilmil mostly takes over.

The story may seem naive in a way, and perhaps is, but it is also heart-warming and extremely endearing. The only complaint I have is the make up artist, who couldn´t make a believable „old“ make up for Priyanka and Ileana, and instead they came off looking as if they haven´t washed in weeks. But really, other than that, I loved Barfi. It made me happy. Something no other film this year really managed to do.