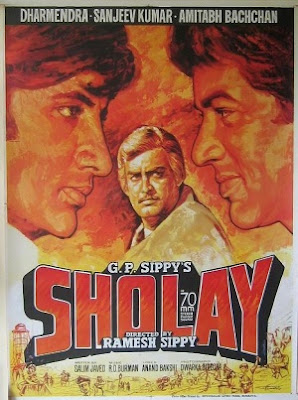 It is not easy to write reviews of some films, and interestingly enough I have more troubles writing about good movies than bad. Perhaps our ability to pinpoint what we don´t like is better developed than our ability to praise? In any case to review Sholay wouldn´t be easy even if I found it really bad, because of its indisputable iconic status. The film has been labeled as the „best ever from Bollywood“ more than just a few times. Well, let me admit right away I respectfully disagree. Sholay is nowhere near the perfection I find Guru Dutt´s movies to be, it doesn´t topple neither K. Asif´s Mughal-E-Azam, nor Mother India, or some films that came after it. At the same time Sholay is still a damn good film and one that broke records and set trend for the next 15 or so years. In fact most of the 80s were spent by trying to recreate the magic of action scenes and selfless heroes more than anything – and most of them fell flat. So what it is that Sholay has which clicked so perfectly with the audience (because this is one of those blockbusters thriving on word-of-mouth and nothing else)? 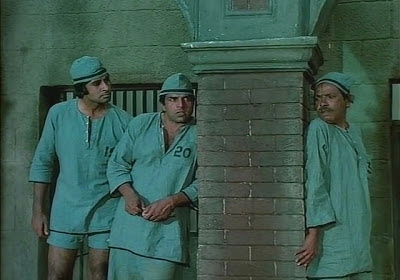 The story is heavily inspired by Hollywood and its fondness of stories from the lawless „Wild West“, the similarity of the plot with „The Magnificent 7“ uncanny. A retired police officer Thakur Baldev Singh (Sanjeev Kumar in one of the „aged“ roles he essayed, though ironically her didn´t even live to turn 50 himself) hires two men to capture a dangerous dacoit Gabbar Singh (Amjad Khan), who is terrorizing a small village of Ramgarth. Why doesn´t he turn to the police? Because he has a personal issue with Gabbar, who murdered his whole family – and left him without arms! To take his revenge, Thakur chooses to offer the quest to two thieves Veeru (Dharmendra) and Jai (Amitabh Bachchan). They not only accept, but after a while make the fight against Gabbar and his gang for their own as well. And in the moment in between the fights, Veeru manages to romance a chatterbox Basanti and Jai takes liking to a young widow Radha from Thakur´s house.... 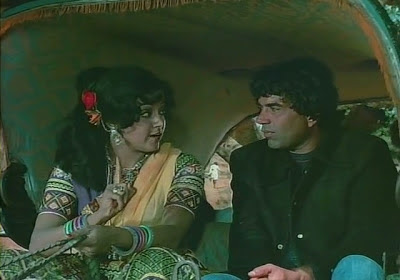 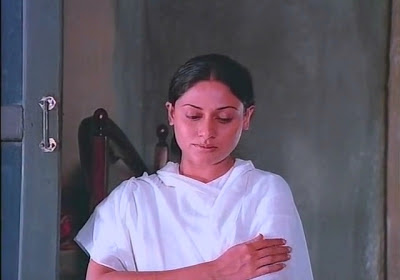 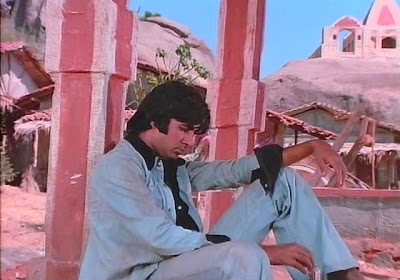 First of all – the cast is extremely attractive. Amitabh Bachchan and Dharmendra both were a real rage back in the day. With distinct looks and approach to acting, they were quite different from each other, yet one complimented the other perfectly. They definitely belong among my favourite „bromances“. While Dharmendra is a mischievous devil making girls swoon with his eternal boyish charm, and - in spite of Sholay being a serious film – his use of humour, Amitabh represents the silent strength in the background. Jai is the solid ground from which Veeru can operate, if you will. At no point you feel a need to ask if two against God knows how many are not too little, because the duo is so dynamic you just have faith in their abilities. Sanjeev Kumar and Amjad Khan too are excellent in their roles. 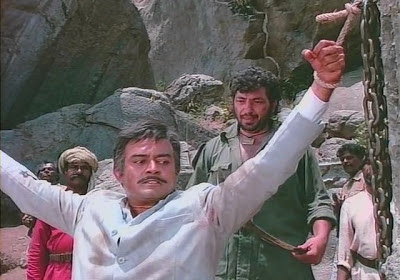 However while both Hema Malini and Jaya Bachchan were the most popular girls at the time, I never managed to warm up to either of them. Jaya has always been a „grey mouse“ with nothing that would really capture my interest, Hema on the other hand I tend to find rather annoying. Her dialogue delivery especially has always been week. Thinking about that – Radha was a quiet „gray mouse“ and Basanti was a smack-worthy annoyance, so the casting was probably appropriate. I must say I felt sorry for Radha in the end, as even the hopes for a new life were snatched away from her.

The music of the film has been celebrated as well. „Yeh Dosti“ song is easily the best one as far as melody goes, followed by Hema´s famous „Jab Tak Hai Jaan“ dance of pain. The revered Holi song left me cold though, I enjoyed more „Mehbooba“ song where Helen put her beautiful legs to action. 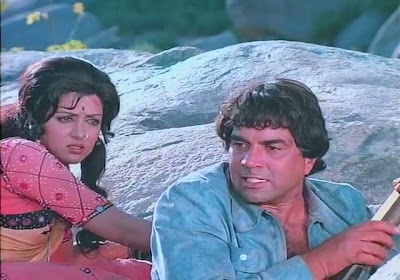 I think the only major flaw I found in Sholay was the whole „Veeru and Jai in jail“ business at the beginning. The characters were introduces through it, but on the whole it was not necessary at all. The Hitler-like grotesque figure of the jailor, marching ironically (or was somebody being ignorant?) to the tune of English „For he´s a jolly good fellow“, seemed like from another time and space altogether, and wasn´t really funny either. Also to be brutally honest I burst out laughing when the armless Thakur gained magic powers and was flying in the air, fighting Gabbar with his feet. The scenes that stood out for me were for example when Thakur returns home to find his children murdered. As the crude wind blows away the white sheets, uncovering the bodies, you almost want to cry out. Another classic one, though of completely different nature, would be Veeru´s marriage proposal/suicide threat, so often referred to in many films afterwards. And of course – when the unbreakable dosti finally breaks in the end.... 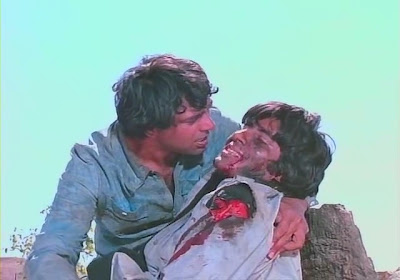