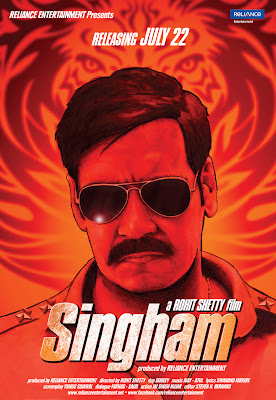 When I watched it for the first time I was still under the influence of Dabangg, which I had seen just recently, and somehow in my mind I couldn´t help but compare everything in Singham to it. Watching Ajay Devgn beating up the trash out of villains somehow gave me a feeling I have seen something like it already and ultimately Dabangg could have been blamed that I did not enjoy Singham as I probably would if it was released much later or much earlier. It was only during second (and third) viewing that I could appreciate the movie. True – the setting, the seemingly almighty policeman from a village in a familiar khaki uniform, the booming main theme playing whenever he gets angry, the enemies involved in high politics, all that are features the film has in common with Dabangg (and other similar films that have began popping up like mushrooms after rain lately), but Bajirao is not corrupted Chulbul, his plight is not instigated by family problems and his lady love is not at all pleasant to watch.

Bajirao Singham is a police inspector serving at the place closest to his heart, his home village. He makes sure no injustice is commited against anyone, and in return he gets devotion and support from one and all. However then he insults a politician Jaikant Shikre – who in fact is nothing more than a complete villain who earns money and is responsible for criminal activities like kidnappings and murders – and to take revenge on him Shikre has Singham transferred to Goa, a town that is completely under his influence, and where Singham has nobody to help him in his efforts. As he soon comes to know, there used to be another police inspector who tried to destroy Shikre and uncover his illegal activities, but ultimately, after months of mental torture and false allegations concerning his own honour, he took his own life. Singham, however, refuses to fall into the same trap.

There is a rather useless love story line thrown into the movie, but it doesn´t contribute anything to the film or even the character of Singham. And unfortunately the actress is so annoying and unconvincing she makes it all one big bore. Childish and immature as Kavya, Kajal Agarwal is not a good match for mature and very manly Ajay Devgn, looking like his daughter. In the scenes with her Ajay also seems to „turn off“, while in his individual scenes he is wonderful. Forget Salman Khan. If there is one actor whose one angry look will make your knees shake and whom you would instantly believe he is capable of tearing iron apart it is Ajay. He is brilliantly matched as far as performance is concerned, by his evil enemy Shikre aka Prakash Raj, who makes his villain a threatening and yet not inhuman (read: not without a certain lack of confidence and some major fears) persona. You can never cheer for Shikre, but you have to cheer for Mr. Raj. Rest of the supporting cast too are good, it was a pleasure seeing Ashok Saraf.

While I am not completely a fan of all the south masala remakes, Singham is one of the good ones. It has tremendous repeat value (I was quite surprised when I found out I was enjoying it so much the second time, in spite of knowing what and how things are to happen) and although at first I was ready to dismiss it as a wanna be Dabangg, I have to take my first impression back. Singham has things to offer that make it stand on its own feet, in spite of outer similarity to other, similarly presented movies.