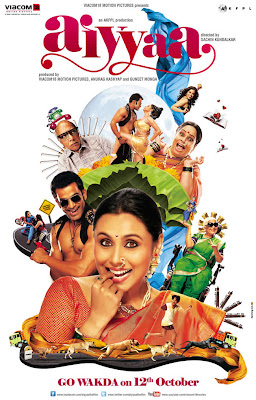 Promos were mostly fun and reviews atrocious. I had been looking forward to Aiyyaa, but after reading reactions randomly appearing on forums and blogs, my expectations for the movie went really low. Partly because of that, partly because my original willingness to like it and partly of course because I am a source of unpopular opinions – I ended up far from hating it. Aiyyaa is not the fun the promos promised and the treatment of the story is kinda all over the place, but ultimately it is an OK one time watch. If you are not watching with family and like Rani Mukherjee.

Meenakshi is an ordinary girl from a somehow crazy and over the top family who is trying to wed her off at the soonest. While the prospective grooms come and go, Meenakshi is trying to set up her own life by taking up a job as a librarian at art college. She falls in love with a student and surprisingly not because he has the face and body of the souther superstar Prithviraj, but because he just smells like heaven. She keeps following him and asking about him, while he seems completely oblivious. Meanwhile her family finds a suitable groom and fixes her engagement, and poor Meenakshi doesn´t know what to do, especially because her Mr. Good-smelling has a really bad reputation.

First problem there is – who is Meenakshi? She is introduced to us as a young woman who is supposed to be wild, carefree and aspiring a film star. But ten minutes into the film and you realize she is none of that. Her „filmstar“ dream is never mentioned again and her slipping into daydreaming and imagining herself as a famous heroine (which gives us the best ten minutes of the film – Rani enacting some famous songs by Madhuri, Sridevi and Juhi was real fun) has no importance in the story either. The scene with Meenakshi trying to buy drugs, because she thinks that is what makes Prithviraj smell so good, was not only completely needless, but did not make any sense. An educated computer professional she is supposed to be would certainly know something about drugs and would hardly go buy it with a big smile and loose change in her hands. There are more similarly useless moment in the film, for example when Meenakshi runs away from her fiancé´s house – it is never mentioned again and we do not even get to see what effect it had. At times it feels the script writer had something in mind, started to write, but then decided to to progress, but at the same time felt sorry for what was already written so it stayed in the film.

Supporting cast does a good job. Sure, Meenakshi´s whole family is mad, alright, and so is her co-worker in the library. I did not find them annoying but definitely could see why others might. As a person who prefers Madhavan over Hrithik Roshan I preferred the character of Madhav to character played by Prithviraj, and actually caught myself hoping Meenakshi would marry Madhav and Prithviraj´s character Surya would indeed prove to be an eccentric junkie, but I guess that´s just me.
Aiyyaa could have easily been a cute family film, or at least a kind of romantic comedy, but it ends up being all over the place. And in the end you realize hardly anything happened during the film. It is difficult to finish it at one go, I had to make several breaks. All in all I did not really mind the film, even enjoyed the first hour quite a bit, unfortunately right after the infamous Dreamum Wakeupum song it went all downhill.

Apart from the lavani number Sava Dollar which introduces Meenakshi to the viewer right at the beginning of the film, all of the songs made me feel awkward and happy that I was watching the film alone. Rani is in my opinion one of the most underrated dancers and I love her energy, but choreography and picturization of the songs in Aiyyaa is just screaming „vulgar“, bordering at moments on the verge of becoming soft porn. While I understand Meenakshi was a young and healthy woman with normal female fantasies.... I was left with a feeling I did not want to see her fantasies on my screen, no matter how well she dances or sexy she looks (which she did). The song picturized on Meenakshi´s brother and co-worker is downright unwatchable.

The film stands on Rani, and she is the best thing about it. She nails the role perfectly, her expressions and dialogue delivery are superb. As mentioned already, she dances great (but oh... well....) and looks beautiful. At the same time a role like this is a piece of cake for her, and while she has nothing more to prove as far as her acting talent is concerned, one still feels kinda cheated, especially because the film is so clumsily written and executed. It is on the „dark“ side, but not the worst of the year for sure, even though I say while writing this review I realized several things that I managed to blissfully ignore while watching.